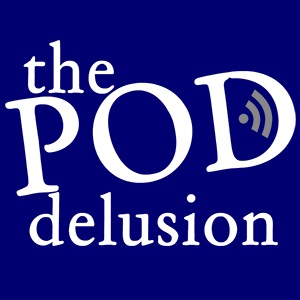 I know chemistry. Not loads but some. I work in the chemical industry,  and (like many scientists) get frustrated from time to time about the miserably low level of basic knowledge of chemistry the average newspaper reader has. (I say "newspaper reader" - tabloid media especially seem to happily revel in ignorance, in the continual pursuit of headlines, and so sales.)

The most recent offender was the Sunday Mail, with their story about UK "selling nerve gas chemicals to Syria". I wanted to write a piece about it anyway, but when the crunch came that no actual chemicals had been sent on the licenses that the Sunday Mail claimed had, it seemed too perfect to miss. Hence, the Pod Delusion piece, the script of which is further below.

There is plenty to argue about whether business trumps all and regardless of the political state of a nation, we should be keen to transact but that's not really what this is about. The UK does tend to deal with most countries is most political states and has systems in place to try and mitigate the risks. But the point I was trying to make was that this is not like selling arms to a country (which UK also does, seemingly merrily) - this is about selling extremely common base chemicals which have myriad  uses, some of which are bad. It escalated to "Britain sold nerve gas to Syria" which is wrong, silly, and massively unhelpful to people trying to think through how best they want our country to react to the situation in Syria.

UPDATE: In a lovely twist of irony, the Mail on Sunday ran their front page today about previous export licenses the UK had given to companies exporting Sodium Fluoride to Syria. You'll see the chemistry in 2 is exquisite. All you need is sodium fluoride, dimethylmethylphosphonate, phosphorus, alcohol, carbon, hydrogen and oxygen. For a start, this is bollocks (surprise!). More importantly, dimethylmethylphosphonate is a Schedule 2 substance on the Chemical Weapons Convention which means it can't be exported to countries that are not party to the Convention (e.g. Syria). As an interesting aside, I wonder if iso-propylalcohol, which is also used in the synthesis of sarin and makes up a decent chunk of the sarin molecule (and is an even more commodity chemical with zillions of tons manufactured each year, so much so you can buy it on Amazon) would have caused the same stir if UK had exported that as well.

I find it odd that despite the UK openly selling £12bn of ACTUAL WEAPONS to dictators and global ne'er-do-wells (including Syria's chums, Russia) that this sort of ill-informed, could-possibly might-have, I-dont-understand-chemistry-politics-or-risk type stories make the paper.


Following on from last week’s segments on the use of chemical weapons in Syria, this week we heard news that the UK had been caught selling nerve gas chemicals to the regime, 10 months after the civil unrest began. Or at least, that’s what was claimed.

This story is an excellent textbook example of …well… a number of things:

So to the story.

On Sunday 1st Sept, the Sunday Mail in Scotland (a rival of the The Scottish Sun newspaper, if you looking for a comparison) splashed the shocking news that Britain had sold nerve gas chemicals to Syria.

In my short time as a grown-up, I have observed that tabloid newspapers have a very casual relationship with the truth and don’t often splash on huge world political stories of this nature. On the occasion that they do, the story gets picked up by other media outlets very quickly and the whole thing snowballs.

The Sunday Mail is the Sunday edition of the The Daily Record which has a circulation of 250 thousand newspapers per day and yet, even so, by the end of the day, no other mainstream UK newspaper had taken up the story. Huge red flag. In fact, I always find it bizarre that people who tend to disdain tabloids will happily use them as prrof on the odd occasion they say something that coincides with their belief – “Ah yes” they say, “the Daily Mail NORMALLY is a bastion of right wing, anti-women, homophobic, race-bating but on THIS occasion it’s really presented the arguments fairly and accurately”. Well, as you wish.

So did the UK sell chemical weapons? No. And if you are one of the 1000s of people retweeting  otherwise, go and buy yourself a new tinfoil hat.

The newspaper described them as “nerve gas chemicals”. That certainly sounds like chemical weapons, but reading on, the paper is referring to sodium fluoride and potassium fluoride, saying that the chemicals are capable of being used to make weapons such as sarin. Hmm. We’re already quite a few steps back from the headline. But that’s how tabloid works, right? The agreed rule is that the headline is to draw you in and doesn’t necessarily have to be completely correct. Whatever.

Even well-known New Scientist consultant and science author Marcus Chown (who should totally have known better) merrily confused the difference between a chemical weapon and a possible chemical weapon raw material and retweeted that “the UK sold nerve gas to Syria”, using the Sunday Mail  as a primary source. He appears to now have quietly deleted these tweets.

In any case, it’s true – sodium fluoride can be used to make chemical weapons. But here’s the stink. It can also be used to make a zillion other things and is a bulk commodity base chemical. If you want to know how scary and dangerous it is, have a look at your toothpaste ingredients – one of sodium fluoride’s main uses is in fluoridation of water supplies and toothpastes. There are millions of tonnes of this chemical made every year. Sodium fluoride is used to make fluorocarbons, a type of which PTFE, better known by DuPont’s brand TEFLON® - that’s how ubiquitous this stuff is. It’s also why chemistry is so fascinating because these raw materials can be used for myriad things and depending on the other chemicals in the pot you can make medicines, toothpaste, frying pan coatings, treat metal surfaces, make wood preservatives, making fire fighting foams, plumbers tape and, yes, sarin.

A fantastically useful base chemical can also be used to make bad things as well as good things – so whaddydo?
In the UK, there are export licences for things we’d like to keep tabs on. You can download the whole list – it’s 275 pages long, so rather than read it out, I’ll get James to put a link in the show notes.
As it turns out, the EU (as we as part of it) has already cottoned on to the idea that some things (not just chemicals, but electronics, Navigation equipment and a host of other things) are fantastically useful but also have the potential to be used by bad people, and so, Annex 1 on page 45 and for the following 230 pages,  is the list of items that are referred to as Dual Use. And there on page 108 is Sodium Fluoride.

To get an export license, you need to apply to the UK government with details of what the chemicals is, how much of it, where it is going, what its going to be used for and lots of other useful information. For countries like Syria there will be some sort of investigation by the authorities to satisfy themselves that everything is legit and the license is granted. This way the UK knows exactly what’s going where and can revoke the licences at any time if it needs to.

Getting back to our story – the Sunday Mail made the claim that Britain sold nerve gas chemicals to Syria 10 months after civil unrest. We’ve already seen that the headline is misleading at best but the indignation had begun – MPs began to get on their high horses “At best the government has been negligent and at worst reckless to export material that could have been used to create chemical weapons” said Labour MP Thomas Docherty. Others chimed in similarly.

And then late on Sun night, seemingly unnoticed by The Independent, a weary government spokesperson presented the facts – “In January 2012, we issued licences for sodium fluoride and potassium fluoride. The exporter and recipient company demonstrated that the chemicals were for a legitimate civilian end use - which was for metal finishing of aluminium profiles used in making aluminium showers and aluminium window frames.

"Before any of the chemicals were exported, the licences were revoked following a revision to the sanctions regime which came into force on 17 June 2012."

So the Sunday Mail story was wrong in nearly every aspect. No chemicals had been exported, the dual-use system had been followed meticulously and everyone had done their job satisfactorily well. No story. Maybe just a lesson in why you shouldn’t read tabloids, and that despite what science writers tells you, the UK has one of the most rigorous export control systems in the world.

This is Dr*T, praising red tape, for the Pod Delusion.

Keep Libel Laws out of Science

Dr* T
Who I am is largely irrelevant, and indeed so are most of my thoughts. Nonetheless, it winds me up that I am supposed to swallow half-truths and untruths relating to scientific claims emanating directly from media sources and indirectly from people who haven't a clue what they're talking about. Look, you've got me started. (You can email me at thinkingisdangerousblog AT googlemail DOT com.)